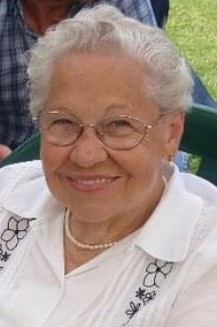 Please share a memory of Esther to include in a keepsake book for family and friends.
View Tribute Book
Esther L. Dinger, 90, of Tionesta, passed away Sunday, February 21, 2021 at home. She was born December 3, 1930 in Distant, PA to the late John W. and Daisy G. Wright Holibaugh. Esther was married on June 6, 1951 in Hawthorn, PA to Herman Dinger Jr., who survives. She was a homemaker for most of her life, she enjoyed spending time with her family, especially her grandchildren. Another enjoyment for Esther was camping, she was a member of the Good Sam Camping Club and the Pine Grove Rover Campers Club. She also was a member of the Tylersburg United Methodist Church. Along with her husband she is survived by her children: Patricia Seitz and her husband Jim, of Lucinda, Debra Schill of Lucinda, Peggy Silvis and her husband Bob, of Tionesta, and Gary Dinger of Fryburg; her grandchildren: Tommy Seitz, Billy Seitz, Selena Daugherty, Jason Schill, Stacy Wolbert, Nicole Dailey, Aaron Dinger, and Luke Dinger; six great grandchildren; and numerous nieces and nephews. Esther was preceded in death by her parents, grandson, David Schill, her siblings: Ruby Ross, Wilda Walters, Edith Troup, Mae Hollobaugh, Alta Adams, Leone Hunsinger, Helen Miller, Wesley Holibaugh, Leroy Holibaugh, Edwin Holibaugh, Louise Skinner and a daughter in law, Kami Dinger and a son in law Thomas Schill. A private funeral service was held at the convenience of the immediate family, with the Rev. Jeffrey Foor, pastor, officiating. Arrangements were entrusted to the Borland-Ensminger Funeral Home, Inc. in Leeper, PA.
To plant a beautiful memorial tree in memory of Esther Dinger, please visit our Tree Store

Look inside to read what others have shared
Family and friends are coming together online to create a special keepsake. Every memory left on the online obituary will be automatically included in this book.
View Tribute Book
Services for Esther Dinger
There are no events scheduled. You can still show your support by planting a tree in memory of Esther Dinger.
Plant a tree in memory of Esther