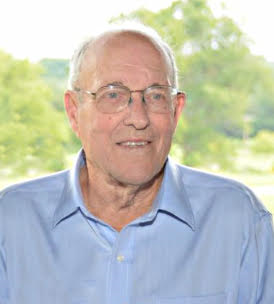 Please share a memory of Franklin to include in a keepsake book for family and friends.
View Tribute Book

Frank Kiser, a life-long resident of Clarion County, passed away on May 1 at the home of his daughter and son-in-law in Shippenville, where he lived for the past 6 months. He was 95 years old. Born on July 13, 1923 to Elsie and John Kiser, Frank was a devoted husband, a caring dad and a loyal friend. He was also a World War II hero, a hard-working provider and one heck-of-a golfer, taking great pride in the fact that he golfed his age well into his eighties and belonged more than 50 years to the Pinecrest Country Club. He was a proud, principled and morally driven man.

For many years, Frank owned Kiser Welding Service in Clarion where he bid, built and repaired many of the small country bridges in western Pennsylvania. He also worked as a supervisor for a local highway construction company and finished his career supervising the construction of a hydroelectric facility in West Virginia. He could fix anything and loved to tinker in his woodworking shop, designing and building Adirondack furniture for everyone in the family. In his later years, Frank loved reading the daily newspaper and completing its daily Sudoku puzzle, playing Solitaire, Spider and Free Cell on his computer, and puzzling.

Frank's tenure as a World War II veteran held a special place in his heart and mind, where he served as a Flight Engineer on a B-24 in the 14th Air Force Flying Tigers, 308th bomb group, 425th bomb squadron in the China-Burma-India Theater. He humbly, yet proudly told of heroic missions taking out ships, airports and the Yellow River Bridge. He had the greatest respect for his crew and especially his pilot, Captain Cecil Lee Turner.

In addition to his parents, Frank was preceded in death by his siblings: Herbert Kiser (Eltie), Patricia Wood (Cliff), Philip Kiser (Helen), infant sister, and his son-in-law Robert Nelson.

No public services are planned at this time. The Borland-Ensminger Funeral Home, Inc. is handling the arrangements.

To send flowers to the family or plant a tree in memory of Franklin Kiser, please visit Tribute Store
Thursday
2
May