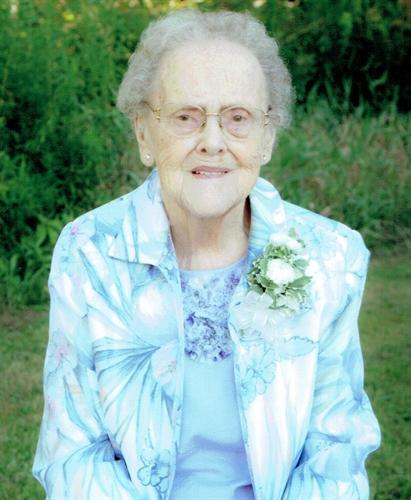 Please share a memory of Ima to include in a keepsake book for family and friends.
View Tribute Book
Ima J. Culp, 96, formerly of Crown, passed away peacefully in her sleep on Tuesday, September 27, 2016 at Jefferson Manor, Brookville, where she had resided since August 2015. Born, January 17, 1920, in Marienville, she was the daughter of the late Ralph and Erdie (Moore) Knight. Her mother died shortly after her birth and she was raised by her maternal grandparents, Clarence and Laura Moore. Ima attended Hottleville Elementary (one room) School and Marienville and Sigel High Schools. On January 29, 1941, she married Milton (Dick) Culp, at St. Mary Church in Crown and he preceded her in death on November 14, 1990. Ima retired from Crator Manufacturing, Inc. located in Tionesta on July 1, 1982 after 23 years of employment. She held various other employment, but her greatest joy of her life was raising her children and being a homemaker. She enjoyed shopping and dining out with her daughters and granddaughters. She is survived by one son and three daughters: Richard Culp and his wife, Dortha of Centerville; Mary Lou Petruney and her husband, George of Sheffield; Ellen Peters and her husband, Wayne of Leeper and Reada Culp of Crown. She is also survived by the following grandchildren: Verneada Schill and her husband, Kevin of Snydersburg; Yvonne Weaver and her husband, Mark of Lucinda; John Wolbert and his wife, Karen of Shippenville; Laura Sherman and her husband, Henry of Lucinda; Stephen Ochs and his wife, Kim of Middlefield, OH; Michelle Grubs and her husband, Tom of Sheffield; Timothy Hepinger and his wife, Nancy of Sheffield; Richard Hepinger and his close friend, Debbie of Jamestown, NY; Ima Culp and her husband, Craig of Centerville; Amanda Roche and her husband, Lynn of Winchester, KY; Molly Wagner and her husband, Jason of Pleasantville; Scott Peters of Clarion; Josh Peters and his wife, Brooke of Pine City and one step-grandson, Richard Petruney and his wife, Kim of Russell. She will be sadly missed by 35 great-grandchildren and 2 great-great-grandchildren, whom she loved dearly. In addition to her parents and husband, Ima was preceded in death by her daughter, Juanita Ochs; an infant daughter, Verneada Culp; and two son-in-laws, Robert Wolbert and Stephen Ochs; two grandchildren, Sara Culp and Brian Petruney and one great-grandchild, Lucy Peters. Family and friends may call on Thursday, September 29, 2016, from 9:30 – 10:30 a.m. at the Borland Funeral Home, Inc. in Leeper. Immediately following, a Mass of Christian Burial will be celebrated at 11:00 a.m. on Thursday, at St. Mary Church in Crown with Rev. Christopher Barnes, pastor, as celebrant. Interment will follow in the church cemetery. The family suggests memorials be made to St. Jude Children Fund.
To send flowers to the family or plant a tree in memory of Ima Culp, please visit Tribute Store
Thursday
29
September

Share Your Memory of
Ima
Upload Your Memory View All Memories
Be the first to upload a memory!
Share A Memory
Send Flowers
Plant a Tree