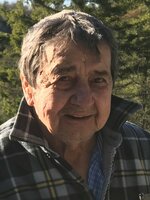 William "Bill" J. Wolbert Sr., 82, of Clarion passed away on Wednesday, August 3, 2022 at Clarion Hospital. Bill was born on November 29, 1939 in Snydersburg to the late Frederick A. and Mary D. (Weaver) Wolbert. In his younger years, he attended St. Joseph Catholic School and attended St. Joseph Catholic Church in Lucinda, where he had always remained a member. After school he went on to serve in the military, the United States Army, where he earned the rank PFC E-3. He was a sharpshooter and earned a Good Conduct Medal. Bill had worked at Ochs Lumber for a number of years, then went on to work for Owens Illinois until his retirement. Bill enjoyed playing cards, tinkering with mechanical things especially his tractors and watch collection. What brought him great enjoyment was spending time with his family and taking car rides with his lap sitter, Scooby, his dog. Bill is survived by his children: Kathleen M. Felmlee and her husband Dennis, of Madison, NC, Rebecca S. Blake and her husband Terry, of Strattanville, PA, William J. Wolbert Jr. and his wife Shelbi and Matthew D. Wolbert and his wife Thao, all of Clarion, PA.; grandchildren: T.J. and Ty Blake, Cara Hockenberry, Carter and Curtis Shipley, and Mandy Felmlee Defranco; great grandchildren: Aubrianna and Mya Corry, Avari and Vincent Hockenberry and Everett Craig; siblings: Barbara Fiscus and husband Jim, of Limestone, PA, Kitty Obenrader and husband John, of Oil City, PA, Don Wolbert and his wife Pat, of Cranberry, PA, Thomas Wolbert Sr. and his wife Dee, of Lucinda, and Greg Wolbert Sr. of Rimersburg; numerous nieces and nephews; his good friend, Sandra Gabler of Shippenville and his dog Scooby. In addition to his parents, Bill was preceded in death by his siblings: Bob Wolbert, Dale Wolbert, and Mary Lou Douglas and a grandsons, William Corry and Dennis Felmlee Jr. Family and friends will be received on Saturday, August 6, 2022 from 11:00am to 1:00pm at St. Joseph Catholic Church in Lucinda, PA. A mass of Christian burial will take place at 1:00pm with the Rev. Michael Polinek, pastor, as celebrant. Interment will follow in St. Joseph Catholic Cemetery. Memorial contributions may be made in Bill's honor to St. Jude's Children Research Hospital, 501 St. Jude Place, Memphis, TN 38105.